Winston Churchill in Tel Aviv, 1921, from the Pritzker Family
National Photography Collection at the National Library of Israel

On March 24, 1921, an overnight train from Cairo arrived in Gaza, a town populated by some  15,000 Arabs and fewer than a hundred Jews, located just inside the southwestern border of the newly created British mandatory territory of Palestine. The League of Nations mandate had been granted to Britain under the terms of the San Remo Conference eleven months before.

The third passenger was Winston Spencer Churchill, another political veteran who just a few weeks before had become Secretary of State for the Colonies, responsible for Britain’s administration of both Palestine and what had been intended to be a parallel mandate in Mesopotamia.

Churchill, Samuel and Lawrence had spent nearly three weeks in Cairo meeting with other senior British officials to reshape the remnants of the Ottoman Empire and create the new Arab kingdoms of Iraq and Transjordan.

Churchill remained in Palestine for eight days on what would be his only official visit to the Holy Land. He was already sympathetic to Jewish aspirations for the national home in Palestine, which Britain had pledged in the Balfour Declaration of November 1917, although his support was tempered by concerns about the cost of administering the new mandate and an even greater anxiety about the ability of the Jewish community and its much more populous Arab neighbors to coexist.

Notwithstanding his doubts, Churchill’s experiences during that visit served to solidify both his admiration for the Jewish people and his support of Zionism. He set himself up in Government House in Jerusalem, meeting with both Arab and Jewish delegations. A talented amateur painter, he also found time to create a beautiful landscape of sunset over the city, a work still owned by his descendants.

On March 27, he dedicated the new British Military Cemetery on the Mount of Olives and the following day met with Emir Abdullah, the newly designated King of Transjordan, to assuage his anxiety about the pace of Jewish immigration into the area. While Abdullah was not wholly mollified, Churchill agreed that Jewish settlement east of the River Jordan would be proscribed. Winston Churchill, TE Lawrence and Emir Abdullah walking in the gardens of the Government
House in Jerusalem, 1921 (G. Eric Matson / Library of Congress)

Two days later, he planted a tree at the site on Mount Scopus of the future Hebrew University, telling the assembled dignitaries, “My heart is full of sympathy for Zionism. The establishment of a Jewish National Home in Palestine will be a blessing to the whole world.” 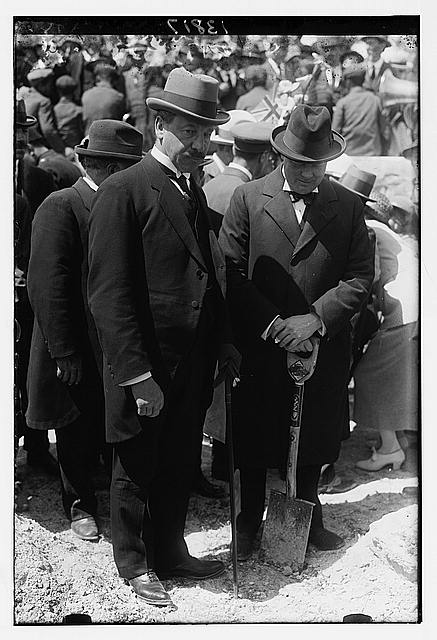 Herbert Samuel and Winston Churchill (with shovel) at the tree planting ceremony on the
future site of the Hebrew Universityin Jerusalem, March 28, 1921 (G. Eric Matson / Library of Congress) 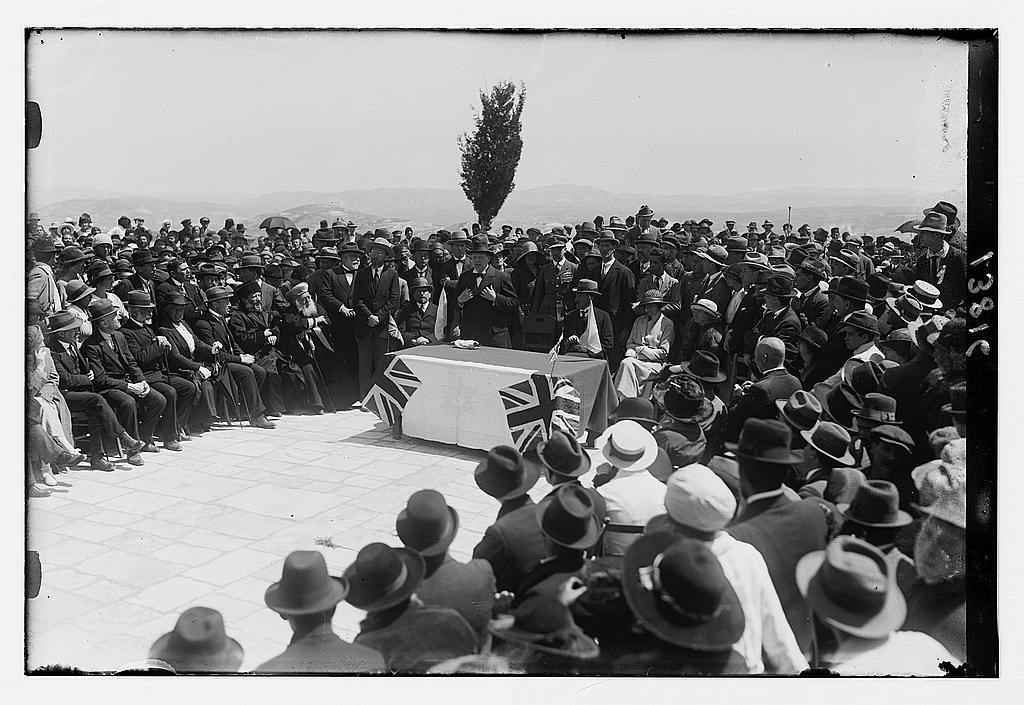 Winston Churchill speaking at the tree planting ceremony on the future site of the Hebrew University in Jerusalem
March 28, 1921 (American Colony Photo Dept. / Library of Congress)

The next day, Churchill received a delegation from the Congress of Palestinian Arabs whose 35-page protest against Zionist activity included a variety of anti-Semitic tropes: “The Jew is clannish and unneighborly.  He will enjoy the privileges and benefits of a country but will give nothing in return.”

It is manifestly right that the Jews should have a National Home where some of them may be reunited. And where else could that be but in this land of Palestine, with which for more than 3,000 years they have been intimately and profoundly associated.

The cause of Zionism is one which carries with it much that is good for the whole world, and not only for the Jewish people; it will bring prosperity and advancement for the Arab population.

Before returning to Cairo the evening of March 30, Churchill visited the then twelve-year-old Jewish town of Tel Aviv, meeting with its Mayor Meir Dizengoff, and the agricultural settlement in Rishon LeZion. On his return to London, he told the House of Commons:

Anyone who has seen the work of the Jewish colonies will be struck by the enormous productive results which they have achieved from the most inhospitable soil. Churchill visited Palestine on one other occasion, while on holiday with his friend Lord Moyne in 1934.

Churchill hoped that the Jews of Palestine – and the Jewish majority state that he envisaged might someday grow out of it – would live in a peaceful and productive relationship with their Arab neighbors.

This aspiration has been partially realized in a cold peace with the major states with whom Israel fought three wars after 1948, and now a newly warmer one with the Gulf states. Nonetheless – one hundred years after his visit – he would find that peaceful co-existence between the peoples living within the borders of what was then Mandatory Palestine remains challenging and uncertain.

Lee Pollock is a Trustee and the former Executive Director of The International Churchill Society, which is co-hosting the symposium “Churchill and the Making of the Middle East: The Cairo Conference One Hundred Years On.”