In May 1945, former Sobibor staff member Walter Nowak was recognized in East Germany by a former Sobibor inmate, Meir Ziss. Nowak was arrested by Soviet authorities. Hubert Gomerski, another Nazi from Sobibor, was also arrested. Then Johann Klier was arrested, but as a person who felt compassion for the Jews and secretly tried to help them, he was soon released.

One of the worst murderers, Erich Bauer, the chief of the gas chambers, was recognized on the streets of Berlin by survivors. On September 1, l951, he was sentenced to death. After abolition of the death penalty in Germany, his sentence was changed to life in prison.

On September 6, 1965, eleven of the SS men who had served at the Sobibor Extermination Camp were brought to trial, accused of crimes against humanity for the atrocities committed at the camp.

The proceedings took place in Hagen, West Germany, and concluded on December 20, 1966. Six of the defendants were found guilty, one committed suicide during the trial, three were acquitted and the remainder were sentenced to various terms of imprisonment:

2. Bolender, Kurt, hotel porter; arrested in 1961. The former commander of extermination Camp III was accused of personally killing approximately 360 Jews and of helping to murder approximately 86,000 Jews. Committed suicide in prison before sentencing.

3. Wolf, Franz, warehouse clerk; arrested in 1964. Accused of personally killing one Jew and helping to murder 115,000 Jews. Found guilty of having assisted in the murder of at least 39,000 Jews. Sentenced to eight years in prison.

4. Ittner, Alfred, laborer. Accused of helping to kill approximately 57,000 Jews. Found guilty of having assisted in the murder of approximately 68,000 Jews. Sentenced to four years in prison.

5. Dubois, Werner, mechanic. Accused of helping to kill approximately 43,000 Jews. Found guilty of having assisted in the murder of at least 15,000 Jews. Sentenced to three years in prison.

6. Fuchs, Erich, truck driver. Helped in the construction of the gas chambers at the death camps Belzec, Sobibor and Treblinka and was convicted for having directed experimental gassings that killed at least 3,000 Soviet prisoners. Also found guilty of assisting in the murder of at least 79,000 Jews. Sentenced to four years in prison. He died in 1984.

Most of the Nazis were freed in a relatively short time; their citizenship rights were revoked only for the duration of the prison sentence.

The most notorious of the executioners, Franz Stangl was arrested in Brazil and extradited to Germany. On July 22, 1970, the Dusseldorf Court sentenced him to life in prison for complicity in the murder of 900,000 people. He died in prison of a heart attack. 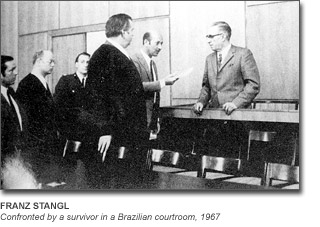 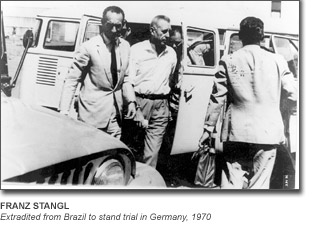 Gustav Wagner, Deputy Commandant of Sobibor, who had ordered the deaths of hundreds of thousands of Jews as chief of the selections and had been sentenced to death in absentia by the Nuremberg Tribunal. With the help of the Vatican, Wagner and Franz Stangl escaped to Brazil, where Wagner was admitted as a permanent resident on April 12, 1950. Wagner lived openly in Sao Paulo until his arrest in May 1978, but the Brazilian Supreme Court refused to extradite him to Germany. According to his attorney, Gustav Wagner comitted suicide in October 1980. 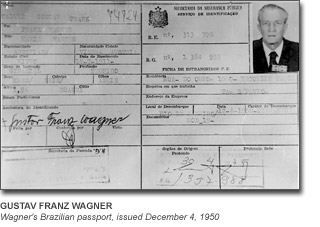 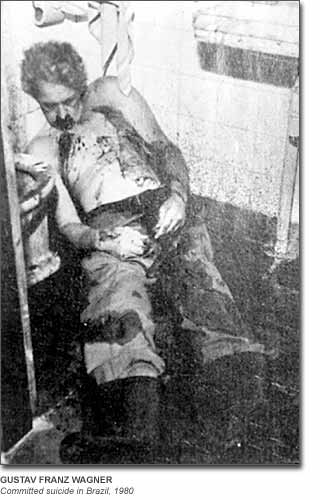 The Ukrainian collaborators also went into hiding after the war. Only a few were ever caught. Some made it to the United States and other western countries where they were received in the disguise of anti-Communists and displaced persons.

One of them, Ivan Demjanjuk, was a guard in Sobibor who was discovered living peacefully as a retired auto worker in the Cleveland suburb of Seven Hills. In February 1986, he was extradited to stand trial in Israel as Ivan the Terrible who ran the gas chambers at Treblinka. It was never proved that Demjanjuk was indeed Ivan and the Israeli court was forced to release him. However, it duly noted that there was conclusive proof that Demjanjuk was a guard in Sobibor.

Some guards were tried in the Soviet Union: B. Bielakow, M. Matwiejenko, J. Nikifor, W. Podienka, F. Tichonowski and J. Zajcew were found guilty and executed for their part in the Sobibor crimes. In April 1963, at a court in Kiev where Sasha Pechersky was the chief prosecution witness, ten former Ukrainian guards were found guilty and executed. One man was sentenced to fifteen years imprisonment. In a third trial in Kiev, held in June 1965, another three former Ukrainian guards of Belzec and Sobibor were sentenced to death.

Sources: The National Archives; Skalman;
Historical research of Thomas ‘Toivi’ Blatt, survivor of the Sobibor death camp who escaped during the uprising on October 14, 1943. Provided by his daughter Rena Smith.