The original purpose of the OSE was to give medical assistance to Jewish communities that were victimized by Soviet pogroms. The OSE placed teams throughout the affected communities to provide this type of aid. Following the upheaval caused by the Bolshevik Revolution in 1917, the OSE moved its network to countries that bordered Soviet Russia, including Poland and the Baltic countries. In 1922, the OSE created an international network of local groups that were based in Berlin; it assumed the name Union-OSE. Albert Einstein became its first president.

The OSE moved its headquarters from Berlin to Paris in 1933 as a result of Nazi persecution within Germany. The OSE in France provided homes for Jewish refugee children from all over Europe; the children’s parents believed they would be safer in France. The OSE also provided services inside French internment camps. While the organization strove to provide more sanitary conditions for Jews housed within such camps, its main goal during World War II was to rescue children from the camps and to place them in the care of OSE homes throughout the country.

During the war, the OSE opened fourteen children’s homes in Vichy, the Unoccupied Zone located in the south of France. The OSE homes were designed to provide the best care available to their residents. For instance, the OSE recruited Jewish physicians who had been barred from practicing medicine by the 1940 Statute of the Jews: a law promulgated by the Vichy government which instituted a system of racial discrimination. Children were also educated by teachers who had been expelled from their academic institutions and were allowed to participate in recreational and cultural activities. In total, the OSE saved nearly 1,200 children from the Holocaust by placing them in these homes, and receiving financial assistance from the United Jewish Appeal (UJA) and the Joint Distribution Committee (JDC). 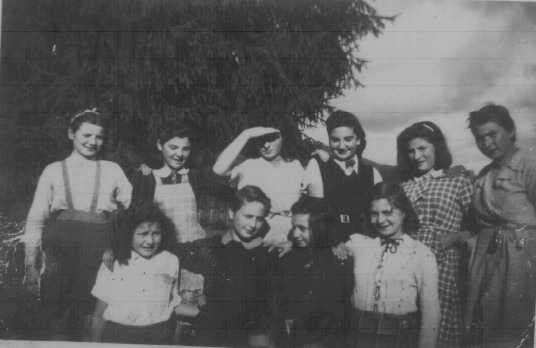 In the summer of 1942, roundups within Vichy increased. For the first time during World War II, children and adolescents were being arrested within France. French officials were more likely to deport children along with their families under a policy decreed by Pierre Laval that called for keeping family units intact. Desperate to protect their children, parents entrusted them to the OSE in order to save them from deportation.

By November 1942, as Nazi Germany assumed control of Vichy territory, the safety of the hundreds of children within the OSE’s care was threatened. The OSE opted to close the remaining homes in order to avoid potential raids that would result in the children being sent to concentration camps. It attempted to move the children across the Swiss border to safety.

The Château de Chabannes was an OSE home run by Felix Chevrier. It provided a safe haven for 284 children between November 1939 and January 1944. At the home, children were assigned sleeping quarters according to their ages. Chevrier’s staff made an effort to preserve the children’s Jewish identity. For instance, they observed the Sabbath and were able to celebrate Jewish holidays.

On August 26, a raid at Chabannes led to the arrest of five boys and one se taff member who wersent to the Nexon camp near Limoges. A few days later, during another raid, the staff were able to conceal the children and thus save them from harm. Chabannes was closed in late 1943. Most of the children were placed into safe houses or smuggled into Switzerland. The home is the subject of a 1990 documentary entitled “The Children of Chabannes.”

In addition to the homes it opened, the OSE provided support to a number of independent homes. Between November 1939 and February 1944, the OSE sponsored eighteen such children’s homes throughout France. Most of these homes were located away from large urban centers and were designed to be self-sufficient. One of the most noted children’s homes that the OSE sponsored was located in the village of Izieu, in Vichy territory. While this home was independently operated, the co-directors, Sabina and Miron Zlatin, received a monthly stipend for each child in their care.

Although the Maison d’Izieu was well hidden, the OSE decided to evacuate that home as well. On April 6, 1944, Sabina Zlatin went to Montpellier, the temporary headquarters of OSE, to try to find alternative lodging for the children. Three days later, in Sabina’s absence, members of the Gestapo raided the children’s home and arrested everyone there. In total, 43 children between the ages of 3 and 18, as well as 7 adult staff members, were imprisoned in Lyon before being sent to the Drancy internment camp. Klaus Barbie, chief of the Gestapo in Lyon, had ordered the children’s deportations to Drancy.

Subsequently, 42 of the children and 5 of the adults were sent to Auschwitz. On April 15, their convoy arrived at Auschwitz; the children were separated from their caretakers and sent to their deaths. Two older children and Miron Zlatin where killed by a firing squad in Estonia. The site of this OSE home in Izieu is now a memorial.

Although the OSE closed the remaining homes before the end of World War II, the organization supported refugee children who were liberated from concentration camps at the war’s end.